The worldwide cost of operations

Healthcare varies around the world, from practices, availability and more noticeably, the cost.

If you’re thinking of travelling or moving abroad, it’s worth taking a look at these costs. No operation is cheap, but some of the differences between countries and the cost of operations can be quite surprising.

International health insurance is just one way of protecting you and your loved ones against unexpected costs.

We’ve taken a look at the costs of some more commonly needed medical treatments to show you just how much these costs can vary around the world. 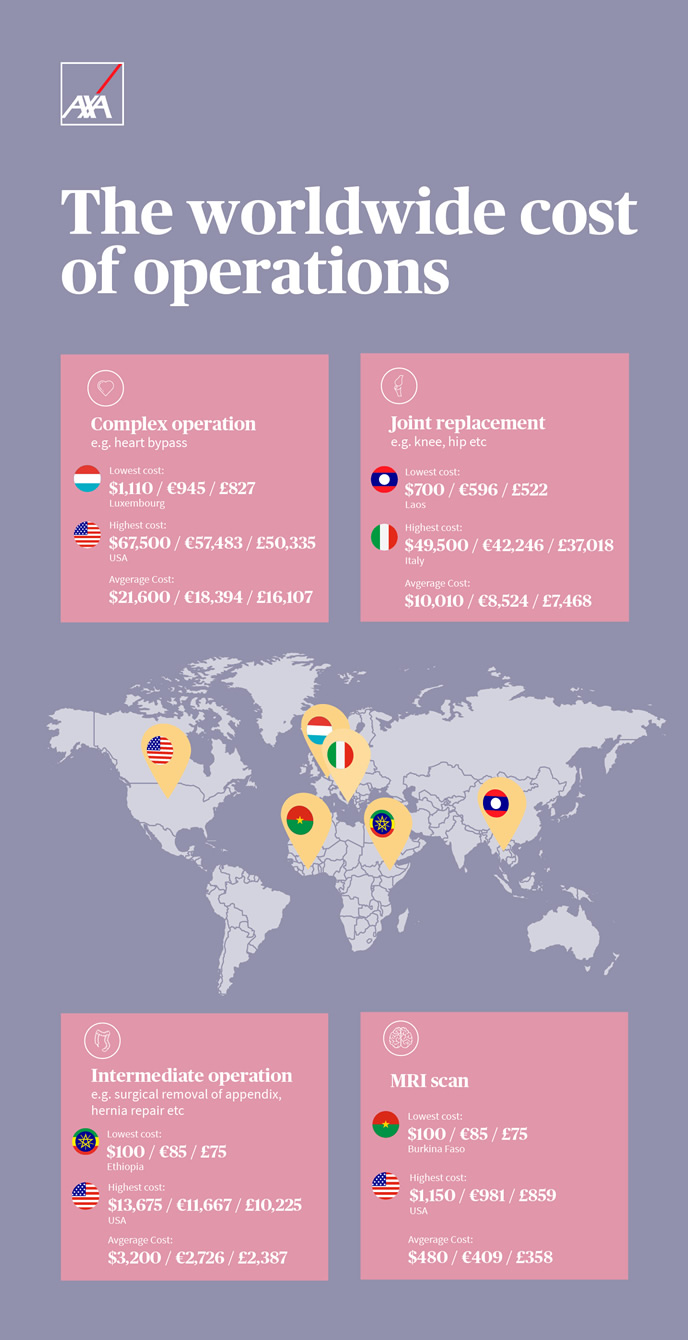 We’ll be by your side

With AXA’s global health cover, you’ll know that you and your family’s health is protected, wherever you are, whenever you need us.

Get a quote online Find out more

How much would you expect to pay?

An MRI scan, which helps us to identify any problems with our bones or organs, is the lowest costing procedure listed here. In Burkina Faso, it costs an average of $100, whereas in the United States it can cost as much as $1,150, which is more than double the average worldwide cost.

Prices in the USA look even more extreme when we compare the cost of an intermediate operation, such as a hernia repair or having your appendix removed. In Ethiopia you could expect to pay just $100, but in the United States, it could cost as much as $13,675, which is more than 4 times the worldwide average cost of $3,200.

The most expensive operation listed here is the heart bypass, which is a procedure that improves blood flow to the heart. At its most expensive, this surgery can cost as much as $67,500 in the United States, compared to just $1,110 in Luxembourg – a difference of $66,390.

Surprisingly, the United States didn’t feature as the highest costing country when it came to joint replacements, such as knees and hips. Italy takes the top spot with a cost of up to $49,500, compared to $700 in Laos. Italy’s cost for joint replacements is nearly 5 times higher than the worldwide average cost for these operations.

Operations like the ones listed here are extremely common, for example, in England, 50,000 people are admitted to hospital with appendicitis each year¹.

To help you understand even more about how much your healthcare could cost abroad, why not take a look at our article on the varying costs of healthcare around the world to see how much a visit to the dentist, fixing a broken ankle, a night in hospital or for medical evacuation could cost you..

Currency rates correct as of 21/05/18 (https://www.xe.com/currencyconverter/) All dollars are US dollars. Data collected from a variety of sources with the chief being research conducted by AXCO Insurance Information Services Ltd. with a base of 148 countries, and are correct as at the 2018 website content. All figures represent an average cost per country, represented by averaging available country data for each treatment. ¹ Acute Abdomen and Surgical Gastroenterology. https://www.nhs.uk/conditions/appendicitis/. Updated June, 2014. Assessed October 2014.

Why regular health checks are so important

Health checks are designed to assess the risk of potential medical conditions that we could develop, and spot any warning signs that we might not have noticed ourselves.

Male mental health: Why we need to look out for the boys

Learn how to support men to better manage their mental health with this handy guide from AXA Global Healthcare.

Understanding high blood pressure and how to reduce it

High blood pressure – or hypertension as doctors often refer to it – is a very common medical condition which can often go undiagnosed. Globally, it’s the leading known cause of premature death through stroke, heart disease and chronic kidney disease.

Top men's health risks & how to address them

Find out the conditions affecting men that can be monitored, managed, treated and even avoided by visiting a doctor and making some lifestyle changes.

Regular health checks with your doctor or healthcare professional will help you to keep happy and healthy. It’s important that we keep on top of how we are; both physically and mentally, so that if there are any problems, they can be looked at sooner rather than later.

An introduction to the Chinese healthcare system

As with all countries, China’s healthcare system has a number of unique quirks, but dive in to our guide below and you’ll soon know everything you need to know.