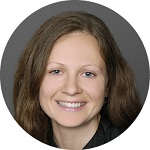 Prior to joining Teladoc Health (previously Advance Medical) as a Senior Physician Case Manager, Dr. Charlotte Panuschka was a visiting fellow at the Department for Otorhinolaryngology Head & Neck Surgery at Guy’s Hospital in London, UK.

In this misdiagnosis series, we’ve been talking to Dr Charlotte Panuschka, who’s a Senior Physician Case Manager at Advance Medical – the provider we use for our Virtual Doctor service. We’ve been finding out more about what a misdiagnosis is , commonly misdiagnosed condition and why they’re often mistaken, as well as how it can be avoided. For a complete guide to misdiagnosis, click here.

When you’re feeling unwell, it’s not always easy to find out exactly what’s wrong straight away. There are lots of conditions which have the same, or very similar symptoms, and some that show up very alike on scans and in test results, which can mean they’re often mistaken for each other.

A misdiagnosis can be made for a number of reasons, and often forms part of the diagnostic process. It can be tricky to know straight away the cause of symptoms without any tests, so medical professionals may use a suspected diagnosis until tests and further investigations can either confirm it, or help them to try and find another explanation.

The problem comes, however, if an incorrect diagnosis is given, and leads to ineffective treatment – in some cases, this means that the patient is simply left feeling unwell for longer than they needed to, but for others, it can have more harmful consequences.

There are some conditions that receive a delayed or mistaken diagnosis more frequently than others, such as cancer, heart attack, meningitis, dementia and iron deficiency anaemia. Dr Charlotte Panuschka has spoken about these conditions and why they are commonly missed or mistaken for other problems:

Cancer
Delayed or misdiagnosed cancer can lead to the disease spreading and becoming harder to treat. It may also mean a patient is given ineffective treatment, which can take a toll on the body. For example, a patient could visit their doctor about a persistent headache. The doctor might suggest lifestyle changes to reduce their stress levels and to make sure they’re well-hydrated. If the patient doesn’t feel any better, the doctor might try several other approaches before suggesting an MRI scan. This is because the headaches are unlikely to be the result of a brain tumour so more likely avenues were explored first.

Some types of cancer don’t show symptoms at an early stage, but this can depend on where the cancer is located, with some locations easier to detect than others. This can mean cancers are missed or mistaken for other conditions.

Heart attack
Some types of heart attacks don’t flag up as a concern through ECG’s, and that can sometimes lead to a misdiagnosis. It’s more common for women to be misdiagnosed, possibly because they tend to present less typical symptoms than men. Misdiagnosis of a heart attack can result in the patient not receiving necessary medications to clear any blood clots right away.

Sometimes patients present with symptoms that are unusual for a condition, or in some cases, no symptoms at all. For example, up to 1/3 of people who’ve had a heart attack did not experience chest pain.

Meningitis
Meningitis can be tricky to diagnose because some of the symptoms are similar to many far less serious common conditions, such as a cold or tonsillitis, but a delay in effective treatment can lead to complications.

Identifying and correctly diagnosing a severe infection such as sepsis or meningitis can be challenging. A definite diagnostic test to confirm the infection can take 24-48 hours to turn positive, which is a very long time considering the rapid development of the infection.

Eczema
‘Eczema’ is often used to describe many types of dermatitis, but not all dermatitis is necessarily eczema. Symptoms between the two conditions can be very similar, so they’re often confused. Treatment varies between the two, and getting the right diagnosis can mean you’re treating it correctly.

Back pain
A very common symptom that most of us will have experienced at some point. The cause of back pain can be challenging to diagnose as there are so many areas that the problem could be coming from; musculoskeletal problems, inner organs, nerves, and also psychosocial factors. Sometimes it’s a combination of problems and treating one does not automatically solve the other. Diagnostic tests and scans can help, but everyone is different and symptoms / intensity of pain vary from person to person, even if they have the same issue. Lifestyle plays an important role and is often a factor not mentioned by the patient or asked by the physician.

It can feel daunting to know that some of these conditions can go unnoticed or be mistaken for something else, but there are a number of things you can do as a patient to stay ahead and avoid a misdiagnosis. Dr Charlotte Panuschka has written a helpful guide to help guide you through some of these, here .

Getting a second medical opinion

All AXA Global Healthcare customers have access to a second medical opinion as part of their plan. Whether you just have some questions about your treatment plan, or you want a full review of your diagnosis, we work with independent medical experts to get you the answers and reassurance you need. So if you have any doubts, you can find out more information and how to request a second medical opinion, here.