Caesarean delivery: everything you need to know

Caesarean sections are increasing around the world. One in five babies are now born by C-section 1 (caesarean). And depending on where you’re living, there are huge disparities between and within countries when it comes to C-sections, highlighting both overuse and underuse due to inequalities of healthcare. We’ve taken a closer look at why this is and what you should think about if you’re expecting, to help you make the best choices for you and your baby.

What is a C-section?

It’s an operation to deliver your baby through an incision in your abdomen. It’s usually carried out under local anaesthetic – so you’re awake, but you don’t feel any pain. A screen is raised so that you don’t see the operation, and it usually takes around an hour. Once your baby is out, you should be able to hold them almost straight away while you’re being stitched up.

A C-section is a major operation and the recovery time is generally longer than for a routine birth. Because of this, you’ll spend a few nights in hospital.

The majority of C-sections are unplanned emergencies when the baby needs to be delivered urgently. Some C-sections are pre-planned – usually because of complications or risks during the current, or a previous, pregnancy. Sometimes, women have C-sections for non-medical reasons as a matter of personal choice.

Whether a pre-planned C-section is due to medical reasons or not, they are generally called ‘elective’ C-sections. It’s worth noting that ‘elective’ doesn’t always mean it was the mother’s choice, it could be down to the beliefs and attitudes of the healthcare providers and societies, or a non-urgent medical reason.

C-section rates have increased in some regions more than others 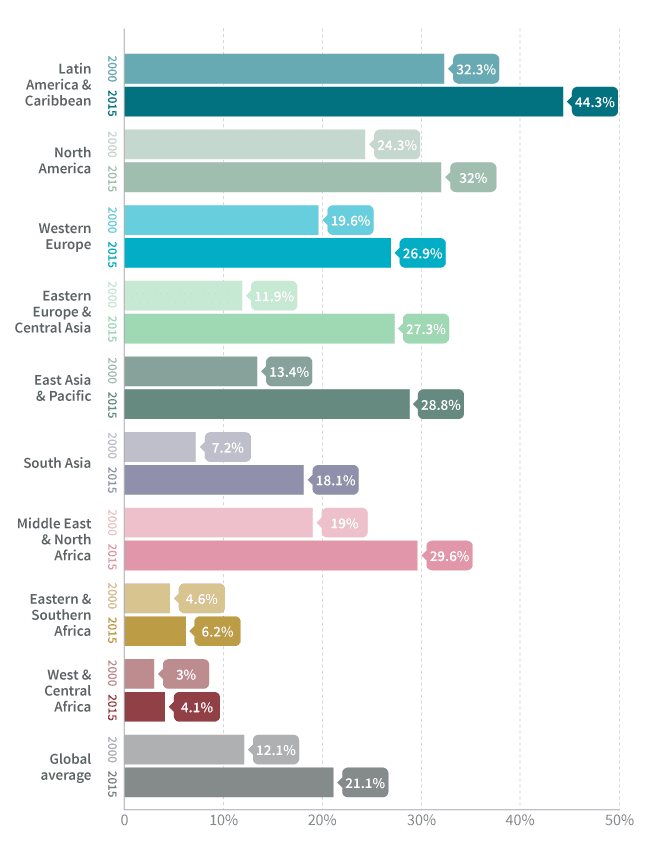 Latin America and the Caribbean have the highest rates with 44% of babies being delivered by C-section, while the average for countries in West and Central Africa is only 4%. This is due to a lack of access to healthcare in these regions.

Which countries have the highest C-section rates?

The use of C-section not only varies greatly by country but within countries. And the following map provides an overview of where rates are highest. More than half of births are by C-section in Brazil, Egypt, Turkey and Venezuela with the highest rate in The Dominican Republic where 58% of babies are being delivered by C-section. Whereas in South Sudan, for example, C-sections account for the lowest rate at just 0.6% of all births. 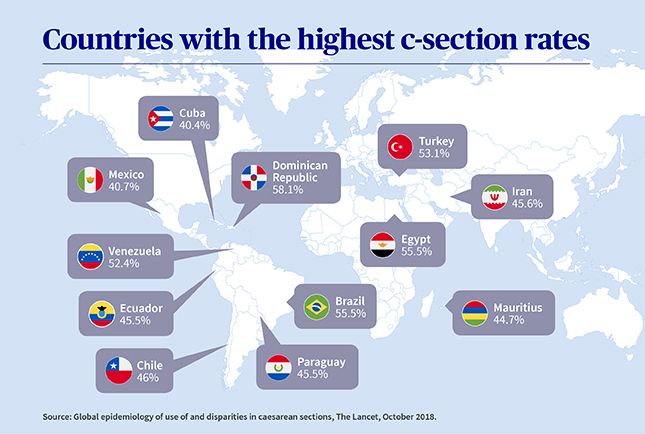 Why are C-sections becoming more popular?

Rise in elective C-sections
The factors influencing the rise in elective C-sections are intertwined with the ways society is changing. Many parents are waiting to have their children in their late 30s and early 40s when the risks around pregnancy and childbirth increase. Similarly, many more people are overweight or obese and this also increases risks during pregnancy.

Tradition and modern life
As society becomes less traditional and pregnancy and childbirth are increasingly seen as a medical procedure, doctors and parents may feel more comfortable delivering a baby by C-section3.

Medical professionals are under more scrutiny, and at risk of more litigation than ever before. They may feel they have more control in a C-section than in a routine birth. Some healthcare facilities, particularly in parts of Asia for example, use C-sections to create a predictable flow of patients – allowing them to book more in.

“Every effort should be made to provide C-sections to women in need, rather than striving to achieve a specific rate.” World Health Organisation

Making the right choice for you and your baby

If you need an emergency C-section, or an elective C-section for medical reasons, it may save your life and the life of your baby. But if everything is going well with your pregnancy and you’re choosing between an elective C-section and a routine birth, there are lots of things to consider before you decide.

Being prepared
It’s important that you plan a delivery that feels right for you, your baby and your circumstances. You’ll be able to research and think about the birth plan you’d like. Of course, things don’t always go to plan, but your doctor and midwife will be able to talk you though all of your options.

If you’re thinking about a C-section for non-medical reasons, your healthcare team may advise against it. That’s because a routine birth is generally considered safer for both you and your baby unless there’s a specific risk.

What to expect if you have a C-section

Extra reassurance, at no extra cost
When it comes to planning your delivery, a second medical opinion can help to make sure that every option has been explored before making any big decisions.

When you use the second opinion service, we’ll put you in touch with independent health consultants, who offer you a reassessment of the medical information you’ve been given, to help guide and support you through your treatment.

Pregnancy healthcare systems around the world
Depending on where you have your baby will influence how likely you are to have a C-section or a routine birth. Take a look at our guides to healthcare around the world to find out more.

A guide to pregnancy and giving birth in the UK

Learn about pregnancy and giving birth in the UK with this guide full of information on antenatal care, hospitals and more.

A guide to pregnancy and giving birth in the UAE

Read this guide for information on the health system in the UAE when it comes to pregnancy, so you know what to expect if you’re expecting.

A guide to pregnancy and giving birth in Singapore

From hospitals and services to costs and cultural quirks, this guide to having a baby in Singapore will help get you ready.

A guide to pregnancy and giving birth in Kenya

Learn about pregnancy and giving birth in Kenya with this guide and find info on antenatal care, private vs public hospitals and more.

A guide to pregnancy and giving birth in Hong Kong

Are you having a baby in Hong Kong? Read this guide to find out what to expect from the local health system.

A guide to pregnancy and giving birth in China

Learn about the health system in China when it comes to pregnancy with this guide on hospitals, treatment and antenatal care.